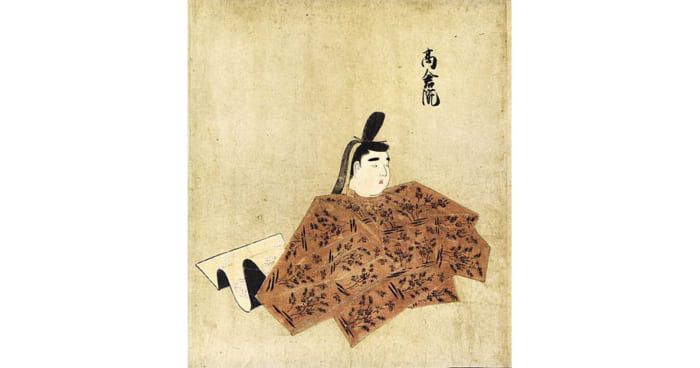 Although he has the strongest guardian throne, but ...

Prince Norihito is the seventh Prince of Pope Go-shirakawa. In the background that he empowered the Emperor, there was a strong boost by the father, Pope Go-shirakawa and Kiyomori Taira-no.

Kiyomori Taira-no is the leader of the most prominent samurai at that time.

Just around here, Pope Go-shirakawa begins to have caution in Kiyomori. The Pope doubted that Kiyomori began to have greater power than him. And that will gradually conflict.

Emperor Takakura was at a loss for confrontation between real father and father-in-law. At the same time his position becomes unstable.

The confrontation between Pope Shirakawa and Kiyomori appears clearly

In 1178, six years after Tokuko became the Empress, Prince Kotohito where Heike was longing for is born. Heike is about the family of Kiyomori. Hei-shi is also called.

With this, Kiyomori became possible to be the grandfather of the Emperor. It is clear that he is trying to do the same thing as the Fujiwara clan who was proud of his heyday during the Heian period.

However, at this time already, the confrontation between Pope Go-shirakawa and Kiyomori had surfaced to the extent that it can not be cheated.

The birth of the prince who should be congratulating really is the cause of accelerating the conflict between real father and father-in-law.

Why does Pope Go-shirakawa watch out for Kiyomori? There are clear reasons for that.

Initially the governance system called Insei began with the intention to overthrow the domineering of the Fujiwara clan and return the political power to the royal family.

It started from the political reform of the 71th Emperor Sanjo, the great-great-grandfather of Pope Shirakawa, and it has been progressing little by little over 110 years.

The actions of Kiyomori reflected in the eyes of Pope Go-shirakawa as if trying to restore it. It seemed that Fujiwara clan just replaces Hei-shi.

Actually Kiyomori was aiming for it. Therefore, the Pope Go-shirakawa absolutely wants to prevent it.

And in 1180, Emperor Takakura was abdicated by Kiyomori 's unilateral judgment, Kiyomori' s grandson, Prince Kotohito (Emperor Antoku) will be the Emperor. With this, the Heike government like Fujiwara clan Sekkan politics was established.

It is the first samurai regime in Japan. At this time Emperor Takakura was 20 years old. Emperor Antoku crowned 4 years old.

The confrontation between the Pope and the Kiyomori can not be repaired due to the death of the mediator.

Shigeko of Pope Go-shirakawa's concubine is the sister of Kiyomori's wife. She suddenly dies three years before the Emperor Antoku is born. Also, the successor of Kiyomori and his son Shigemori never had the same idea politically as Kiyomori.

Kiyomori 's aim is to abolish Insei, aim for politics at the center of the Emperor, and to have a great influence on that emperor to hold the power of politics.

Shigemori's aim is to cooperate with Pope Go-shirakawa, a parallel system that supports the Emperor with two of Joko and Hei-shi while maintaining Insei.

Pope Go-shirakawa, after being caught, begins to be away from Hei-shi and gradually approaches Gen-ji.

Gen-ji is a family of venerable samurai as much as Hei-shi, Hei-shi and Gen-ji in later years begin a fierce battle.

Has he passed away due to the confrontation between real father and father-in-law?

Takakura 's heart was very sick with conflict between real father and father-in-law. It is said that it died from it.

There is such a broken heart talk of Takakura-in in "Heike Monogatari". The Heike Monogatari is a book written in the era a little later, which describes Heike's prosperity and destruction.

Because Takafusa was prematurely, he tried to convey his thoughts to Kogou by letter. However, Kogou cared about the thought of Takakura-in and did not receive that letter.

However, Kiyomori who knew it makes Kogou into a temple and makes it a Buddhist priest, keeping it away from the secular world. Takakura-in who suffered, eventually died of illness.

This story is told that it is a fiction that expresses the domineering of Heike. However, it is impossible to say that Emperor Takakura was fictional, that he had been suffering every day between Pope Go-shihirakawa and Kiyomori.

Takakura-in dies in the following year when she retired. He was 21 years old.