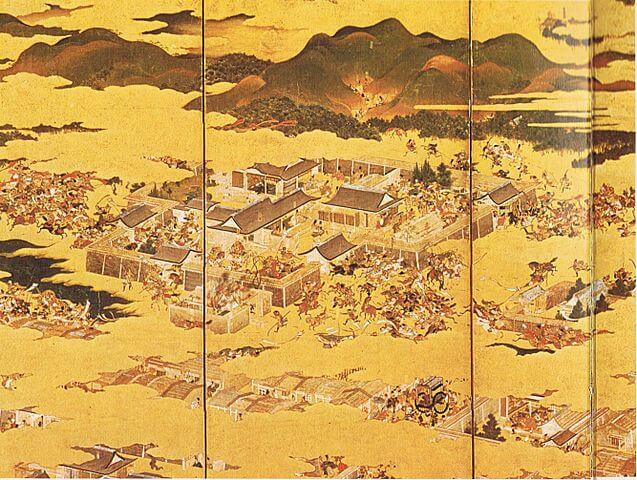 The civil war in Japan called "Hougen no ran" began as a result of parent-child quarrel between the former emperors of Toba-in and Sutoku-in.

The civil war is a major explosion centered on the battle between Emperor Go-shirakawa and Sutoku-in brothers.

Eve before the Great Battle

There is a secret of the birth of Sutoku-in. Toba-in thought that Sutoku-in is not his son but his son's grandfather.
This shocking scandal had enough impact to influence all of Toba-in's life.

The death of Emperor Konoe ignited the fuse line

In the early death of Emperor Konoe, the discord between the parents of Toba-in and Sutoku-in greatly affects the succession of the throne.

Sutoku-in hope that he will again take the throne or his son to the Emperor. Toba-in wanted to stop it absolutely that much.

Sutoku-in is finally coming to the point of explosion for the circumstances from the time he was born.

Toba-in is anticipating a big turbulence, and orders the powerful samurai of Hei-shi and Gen-ji to prepare themselves to protect their own Imperial Palace.

These brothers are heterky brothers, but they were always politically conflicting.
By participating in the Toba-in and Sutoku-in each, these two people expanded to the conflict of political power from the confrontation of succession to the imperial royalty.

In this state the Toba-in deacon died. Sutoku-in was waiting for that time.

In the following year (1156 years) after Emperor Go-shirakawa, the day after Toba-in died, Sutoku-in raises a coup. It is "Hougen no ran".

I briefly wrote the "Hougen no ran" confrontation composition.

All of the political forces of the Imperial family, aristocrats and samurai at that time are divided among family members and fighting.

Emperor Go-shirakawa is the active emperor. Sutoku-in is the emperor two generations ago.

Both Fujiwara brothers, both are fathers of in-law of the predecessor Emperor Konoe.

And here it is worth noting that an influential samurai is participating in the war.

In the later years, Kiyomori Taira-no, Yoritomo Minamoto-no and Yoshitune Minamoto-no who are going to be the hero of the samurai politics were both emperor Gr. In this case, the samurai who will do a fierce battle was a friend.

Toba-in and Emperor Go-shirakawa were preparing in anticipation of a great turbulence, so the Sutoku-in Gr was getting back to the ground very easily.

The result was the victory of the Emperor Gr, and Sutoku-in was exiled to Sanuki (present Kagawa prefecture).

This is a battle to bisect real Japan

In Japan, the battle to divide Japan into two is said to be a "battle of Sekigahara". "Hougen no ran" learns at school, but it is almost forgotten.

Battle of Sekigahara is a battle between samurai. It is famous as a battle to divide Japan into two because winning things will take control of political power.

However, despite the weakness of power, there are no relationships between aristocrats and royalties related to political power at all.

"Hougen no ran", where all the royalty, aristocrat and samurai participated in the battle, is the real "battle to divide Japan".

After all, the one who gained the most was the samurai faction

With this opportunity, Emperor Go-shirakawa will become dependent on the power of the samurai. The political organizations called Sekkann politics by leading aristocrats by the reform of Emperor Go-sanjo will suddenly lose their power, but this opportunity resulted in a further drop in power.

After all, the one that gained the most in this fight would be a samurai faction. With this, samurai forces will become the center of politics. The Heian period will change rapidly here.