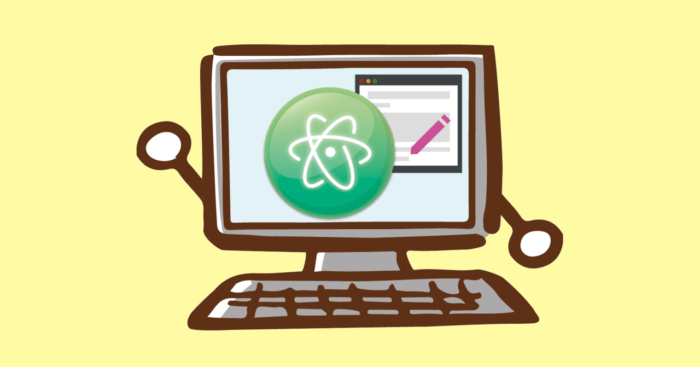 This is how to turn the text editor Atom into an Integrated Development Environment (IDE). Well, it's not that difficult since you just need to install a package.

Compared to creating other program development environments, there are fewer packages to install.

This is written by a Japanese who can't speak English with the help of translation application. Sorry if it's not good.

What is a development integration environment (IDE)?

An IDE is a text editor that provides the necessary functions for program development.

In addition, some have Git operations, local servers, etc.

With all this, you can smoothly develop programs with a single text editor.

Atom also has an IDE package. This is a minimalist version of the IDE that was originally developed by Facebook.

The atom-ide-ui is incomplete as an IDE by itself. It requires the installation of packages for each programming language.

(*** is the name of the programming language)

In the package installation screen, search for "ide-" and you will find it, so you don't have to worry about it.

There are also frameworks such as Vue.js and packages such as React.js and Node.js.

This is all the basic functionality. In addition to this, there is a debugger and compiler, so there is not much else you need.

The atom-IDE is not meant to be just atom-ide-ui. This is because this package is a collection of only common features that can be used in any programming language.

To use it with programming languages such as PHP, Java, Python, etc., you need to install the respective language pack.

You don't have a major language!

You may think this, but since it was originally made by Facebook, there is a bias. Let's forgive that with a smile.

But each of them is based on a tool that was originally widely used. There is no lack of functionality.

I like the fact that Java is based on Eclipse JDT.

Eclipse is an IDE created by IBM, and nothing beats it for Java development, and Eclipse JDT is its core package.

What is lacking in the official version is supplemented by third party products. They are introduced on the official website, so they are highly reliable.

Huh? Some of you may be thinking.

Because the major languages are still missing: no C, C++, Swift, etc.? There are no Microsoft languages either.

Packs for the major languages can be found by searching for "ide-***" in the package installation.

Language packs for the atom-IDE are available for most programming languages from the official, officially recognized community, and other third parties.

Basic functions of the debugger

The atom-IDE also has debugging features. As with the language packs, atom-IDE-ui contains only basic functions, so you need to install the package separately.

The individual debuggers are all made by facebook for now, and are not official for atom.

The color of facebook is amazing, and I guess these are the languages and frameworks that are being developed within facebook.

React is a JavaScript library developed by facebook. We will see more facebook colors in the future.

There is no debugger for Java. Thus, even major languages may not have dedicated debuggers.

As for Java, since the language pack is based on Eclipse JDT, the basic features may be enough for you.

Please try this once. If not, there are other debugger packages that you can use.

However, I'm not sure if it will work because of the compatibility with the atom-IDE.

The atom-IDE has a lot of features, but the number of packages installed is small.

If you are a beginner in program development, the atom-IDE (+ debugger) will suffice since you will not be able to use the various functions.

There are many high-performance packages in atom, so I recommend it to those who find it difficult or troublesome to find them.

I would recommend the atom-IDE to anyone who wants to develop programs with atom.